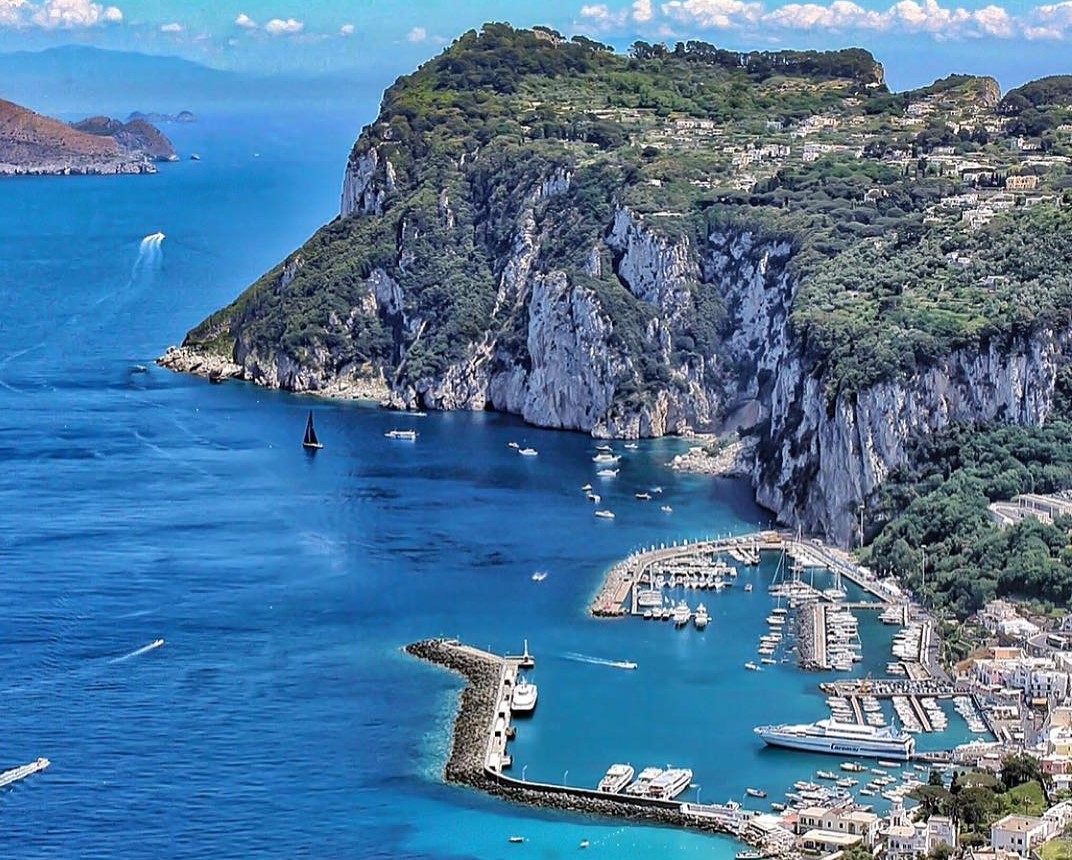 Capri is the most famous island in Naples bay, her uneven costs are bathed and surrounded by the Thyrrenian sea. Originally connected with the mainland of the Sorrentine peninsula with a stripe of land, it became an island due to an earthquake which took place many centuries ago. It is also known as the Blue Isle, because of the beauties and colors of the Mediterranean, melted together which created an inspirational atmosphere for artists and writers who visited the island.

Guests visiting Capri cannot escape from the eternal beauty of the isle and from the nostalgic desire to return on the island soon. Capri make you fall in love. Many international VIP use to visit the isle every year during their holiday, sometime on board of a luxury yacht, such as the ones offered by Capasecca Yacht for an unforgettable day at sea.

There are many legends connected with the isle of Capri since the Greek age.
Giants, Sirens, and mythological figures used to live on the isle ages ago, together with ancient civilizations. The Emperor Tiberius was one of the first regnant to spend his vacations on the island; we can still see the ruins of the roman villas, built during the roman age, with the aim to host the nobility in a paradisiac atmosphere.

The Mermaids in Capri

Capri is strongly connected with the myth of Ulisse, (Eneide, Canto 5 – Virgilio). The epic character, navigating along the crystal blue waters of Capri, sail on the siren’s route and escaped thanks to his intelligence; covering his companion’s hears with beeswax, bonding himself on the main sailing three he listened the siren’s song without been catched.
The Syren’s rock in Capri at Marina Piccola is one of the legendary places connected with the epical poem.

In ancient times Capri and the Vesuvius were two lovers. Capri, sweet and delicate, showing his marine beauties. The Vesuvius, a brave hearth knight. Due to a conflict between their families, the union was dissolved, and the two lovers separated. The lady, desperate, let herself drown at sea and exactly in that point, the isle of Capri come out from the sea. The Vesuvius, once realized the death of his loved one, kill himself burning with an eruption that gave life and shape to the Volcano, which is still alive and overlooks the bay of Naples and the isle of Capri.

The lucky bell in Capri

One of the most popular souvenirs in Capri is the little bell, symbol of the isle. A talisman to give as a gift with the aim to make desires true with a bell ring. The lucky bell take origin in a legend which involved a young shepherd from the isle. The guy only owned a single sheep that was lost during one of their excursions. The young Shepard started to search the little sheep with no results. During a desperate research, the Shepard met Saint Michael which gave him a little bell to help with the research.
The desire to find the little animal was immediately achieved.

The isle of Capri deserves to be visited at least once in life. The Island of Capri offer many attractions, interesting sites, and things to do. One day can be enough just to see the main attractions, but an entire week can be a good time frame to live the island like a local, savoring the small little things that the isle can offer. The most exciting holiday of your live is waiting for you!

You can follow some of the various paths on the green side of the isle, or take a boat to explore the coastline, tanned by the Mediterranean sun. Shopping is a must in Capri, walking along the elegant boutiques at the city Centre. The Isle of Capri will forever be in your hearth. The isle, thanks to her beauty is one of the most romantic destinations for weddings and for romantic trips or honeymoons.

The touristic season in Capri starts in April, and last until the end of October, even if every month of the year is special for a reason. Spring and Autumn are the best months to visit Capri being far from the summer crowds. Weather is excellent from April, even if warm all year long, with very few rainy days and never too cold. Moreover, an intense calendar of events and cultural activities, involve people and artists from all over the world.

There are many events taking place in Capri every year, with the participation of many international guests. Here below the list of the main events involving the international star system.

What to see in Capri – The TOP 10 attraction

Click for more information about: “Capri what to see: Top 10 attractions“.

Things to do in Capri – The TOP 10 attraction

How to reach Capri

Capri is easily reachable by sea, with ferries and speedboats, departing from Naples, Sorrento and surrounding places (click here for more information). Alternatively, to escape from the crowds, it is possible to hire a yacht for the day and visit the isle from a very special point of view to enjoy the real beauties of the isle with a luxury touch.

Once arrived on the isle, it is not difficult to move around. Capri is not very big and is well served by a publiuc bus service, running continuously between the main centres. The Funicolare, a panoramic cable car, connect in a very short distance, the port of Marina Grande with the Piazzetta. Mount Solaro is the most panoramic viewpoint on the isle and can be reached with a chair lift from Anacapri.

Taxi service is always available, moreover if you wish to move like a local, a classic Vespa or a scooter to rent are some of the best and most exciting experiences to live in Italy. For further information, here for you the Tourism website with the main information about how to move on the isle.

Capri is the most precious pearl of the bay of Naples, which includes the Flegree isles and the Sorrentine Peninsula. Those are some of the most interesting places to visit during a holiday, in a very short distance.

Are you dreaming about visiting Capri and surroundings?
Discover the exclusive private tours by boat, offered by Capasecca Luxury Yacht, and the various daily itineraries and longer journeys.